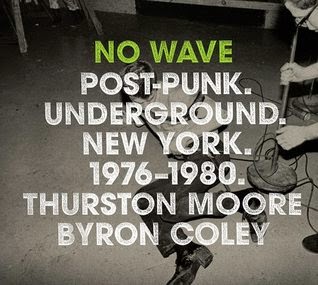 No Wave is the first book to visually chronicle the collision of art and punk in the New York underground of 1976 to 1980. This in depth look at punk rock, new wave, experimental music, and the avant-garde art movement of the 70s and 80s focuses on the true architects of No Wave from James Chance to Lydia Lunch to Glenn Branca, as well as the luminaries that intersected the scene, such as David Byrne, Debbie Harry, Brian Eno, Iggy Pop, and Richard Hell.
This rarely documented scene was the creative stomping ground of young artists and filmmakers from Jean-Michel Basquiat to Jim Jarmusch as well as the musical genesis for the post-punk explosions of Sonic Youth and is here revealed for a new generation of fans and collectors.
Thurston Moore and Byron Coley have selected 150 unforgettable images, most of which have never been published previously, and compiled hundreds of hours of personal interviews to create an oral history of the movement, providing a never-seen-before exploration and celebration of No Wave.

No Wave was for me always better in the abstract. For the most part I'm really not all that into the music. There are exceptions but truthfully these are mostly exceptions to the scene anyway - Glenn Branca's guitar ensembles and some of the latest Lydia Lunch things.

As I'm sure this is the case for many folks it was that lady back there (along with Sonic Youth) that was my entry point into the scene. Truthfully though I have read more about the bands than I have heard them. The book increases this discrepancy via an abundance of quotes and snapshots. There's a vague authorial narrative but the bulk of the journey is conducted via the words of the participants.  The photos are a mix of band promos, gig pics and snapshots.  They work well with the text reflecting it's monochromatic delivery and lack of fussiness with their directness.

Searching and indepth it wasn't, interesting and personable it absolutely was.

Posted by ian holloway at 15:04 No comments: