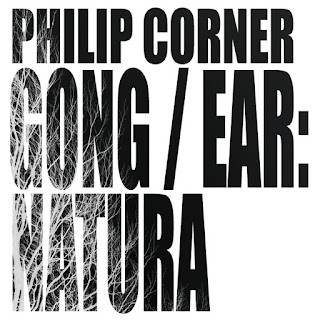 After a very long hiatus following various accidents, injuries and illnesses Quiet World is finally back in the game with our newest release by the incomparable Philip Corner.

'Gong/Ear:Natura' is a set of recordings dating from 1995 of Philip interacting with two locations (an orchard and a courtyard) with gong and assorted other less immediately identifiable sound sources (there's definitely a drink being slurped during 'Courtyard').

The recordings were made using a Sony Walkman and a Sennheiser microphone and so are quite noisy in places.  They've been cleaned up a little but we kept it light so as not to lose the spontaneity and the very nature of the recordings.

The album has been released on CDr and as a download and can be found here...


Philip and his partner Phoebe Neville recently visited Swansea as part of Nawr at the Swansea International Festival and performed two concerts in the town. I was honoured to have been asked to perform with them at the first of these, 'Metal Meditations', alongside Rhodri Davies, Jenn Kirby and David Pitt.

When I first moved to Swansea in 1994 one of the first places I visited was The Mission Gallery and immediately fell in love with the place (in particular it's acoustics) so to finally get to play there - especially playing Philip's fabulous score on David's fantastic gong collection with five amazing musicians in front of an appreciative audience - was a dream come true and they were fantastic hosts. 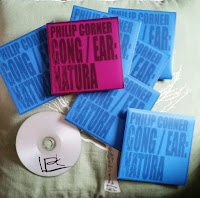 We were hoping to have the new album available for the concert but a series of broken promises by the printers meant the discs didn't arrive in time.  Instead I spent the afternoon hand making copies of the album using blank discs, card and coloured cases that I had around the house; I managed to make 16 (8 purple and 8 blue) before my printer ran out of ink.  Each disc was signed by Philip with 6 being shared with the performers and the rest offered for sale.  We still have a few of the blue left - purple proved very popular - and these will be put up for sale at a future date

The second concert was at the Swansea Studios and featured a selection of Philip's works performed by the trio of Philip, Phoebe and Rhodri.  Each piece was wonderful but for me it was the physicality of opener 'Piano Movement' and the delicate and beautiful 'Petali Pianissimo' that stole the show.

Huge kudos must go to Rhodri for organising these concerts (and the other two in the series) and a massive thanks to Philip and Phoebe for making the journey.
Posted by ian holloway at 12:09 No comments:

You can call it Al

Good evening from the land of thunderstorms and sudden and intense monsoons.  Here on the Welsh coast, contrary to popular opinion, we generally get fairly mellow weather but the last couple of days it's been alternating between blazing sunshine, lightning storms and sudden torrential downpours, it's very confusing and soggy.  I've even bought a pakka mac,  I've named it 'Al'... Al pakka (sorry...not sorry).

Other than the weather this week has been mostly dominated by work. I'm in the process of setting up a new business (wish me luck) and so my focus has very much been on getting the plan correct and in place.  I have managed, for the first time in recent memory, some time to make some music.  I had a couple of sessions during the week and two new tunes have emerged; one is a finished piece whilst the other is most definitely a work in progress.

My plan for the coming week is to find time to work on a couple of new releases for the label, one of which is an exciting return by an old friend.  I'm not going to tell you any more at this point but this has been on the backburner for a few years now whilst I recovered from my accidents and learnt to walk again (twice) and it's about time it came out.  It'll hopefully be released to coincide with an upcoming event.

Last night was the latest in the series of 'Nawr' concerts organised by Rhodri Davies here in Swansea.  I made one of my rare live appearances (photographic proof included) in my BSG guise at the last one alongside Deaf Pictures, Bill Thompson and Olivia Louvel.  It was a fab night in a lovely venue. I've been wanting to catch Deaf Pictures (or Dan and Rose as I prefer to think of them) for a while now as I've missed them every other time they've played here.  Bill and Olivia were both new names to me and what a joy they turned out to be; Bill's immersive guitar improvisations and Olivia's suite of song based electronica were a beautiful counterpoint to each other.

Yesterday the very fine line up was swn-dial, The Swansea Laptop Orchestra, Burkhard Beins & Rhodri Davies and cellist Hannah Marshall.  I thoroughly enjoyed them all but it was especially wonderful to hear long time collaborators Rhodri and Burkhard as they're improvisation was seamless and unless you were watching closely - which I wasn't / couldn't from my seat at the back manning the merch desk - it was impossible to tell where one musician ended and the other began.

To return to Dan and Rose for a moment, in their other guise as film makers they interviewed me (and a host of other Welsh musicians) for their next documentary.  I'm completely fuzzy on the whole experience and can't remember if I talked a load of old tosh or not (probably).  I've had the distinct pleasure of watching one of Dan's previous films and am excited to see all the bits that don't include me of this next one.

Ok so some of you who've used the .co.uk links to Quiet World or Wonderful Wooden Reasons might be a little surprised to find yourselves landing here.

Basically it was time to renew the website and it simply wasn't economically viable to do so so I had to kill them off.  I did save all the contents so much of it will reappear here in some form.  the WWR content is going to be turned into a book so you if you appeared in the pages of the zine then you will soon appear in the pages of a book,  which is cool, yes?

After several years of incident and accident and associated recovery times I am starting to return to the world.  Quiet World is starting to emerge from its enforced hibernation with a couple of releases on the horizon - the first one around September time.

I'm also going to start trying to use this blog more - potentially as a weekly roundup of what's been going on so if you're so inclined you might like to click follow to keep updated.

Peace
Ian
Posted by ian holloway at 10:32 No comments: