melting in the heat

Hello from an unseasonably hot and sunny swansea.

It's been a few weeks since i last wrote anything here so as I'm avoiding the heat i thought i would.

'She Loves to See The Sky' is out and available from a variety of outlets - Quiet World, Aquarius Records, Art Into Life - and seems to be being quite well received which is always appreciated. Thanks to everyone who has picked up a copy. There are two new cds in the pipeline. Sometime soon will be the album i made using some of Banks Bailey's beautiful Arizona field recordings alongside some I made under the pier here in Swansea mixed with layers of keyboard and processed drones. It's an album i'm ridiculously proud of.
Next week will see me start work on the new album with Darren Tate. It's always a joy to collaborate with DT as our working methods are so compatable - he likes making wacky sounds and i like playing around with and editing wacky sounds. I've got him to agree to a 'no electrically generated sounds' rule for this album so I've no idea what to expect from him but i have a battery of bells, whistles, flutes, melody horns, kazoos, harmonicas and ukuleles waiting to be added to the mix. It should be a laugh.
This is the 4th album I've made with DT - The Moon As A Hole, Summerland (also with Banks) & Wet Rat Year are the others - and they've all been quite different from each other and from the music each of us normally make. It's great fun to do and luckily they've all been well received.

Went out for a drink on thursday with my friends Rod and Steve. For those who don't know, these two are responsible for the two videos that you can see on my myspace and at Rod's website. Over a couple of pints or really nice ale at the Joiners Arms in Bishopston (their Three Cliffs ale is stunning) we discussed how we were going to finish the Aurarua audio / video collaboration we've been working on for the last couple of years. An early (and very short) edit was entered in a couple of gallery shows in Swansea last summer and seemed to be quite well received.

My part is a set of three long and dark drones that i recorded about three years ago to which Rod and Steve have been adding images captured around the locale. I think it's stunning and when it's finally finished it can only be more so. Hopefully it'll be done by the end of the summer but I think i said that last year (and the year before).

We're not short of countryside around here but yesterday we found a bit we'd not visited before, the grounds of an old estate in Neath called Gnoll Country Park. Walking around the woods was a very nice way of spending a hot summers day and i managed to make a couple of recordings once we'd got away from the more populated areas. My favourite is a recording I made near the derelict Ice House. You can find it in the rar file below along with another recording made a couple of weeks ago at a place called Craig Y Dinas. I hope you are enjoying these field recordings, they're fun to make as it means i get to mooch out into the wilds and sit under a tree reading a book while my recorder does all the work.

Finally, as I've been asked about it and i mentioned it in an earlier posting. Here's the story of being up a mountain in a cloud.
I've told you before about my partners FairieTrails project where she traces the locations of old welsh fairie tales and then visits the sites. These sites seem to be almost invariably at the tops of mountains or as far off the beaten tracks as it's possible to get in South Wales. Well May Day this year saw us slowly trudging to the top of Pen Y Fan mountain in the Brecon Beacons looking for a lake called Llyn Cwm Llwch. It was nice but slightly windy day when we set off and several minor heartattacks later we reached the top and photographed this view... 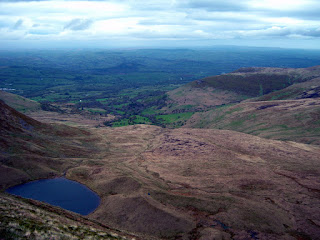 it's quite something isn't it.

As you've probably gathered the lake we were looking for is the one in the photo (yes it is as small as it looks) and typically it was down the other side. Not really being that interested in the lake i decided to find a sheltered nook about halfway down and settled down to read while Sioux went exploring. As i got my book out i felt the first drops of rain. Light showers had been forecast so i put my book away did my little jacket up and watched the view and Sioux clambering down the path to the lake.
Some 20 minutes later with the rain still fairly light i glanced back over my shoulder to the summit where we were going to have to head in order to get back to the car. It was gone. In the time i'd been sitting the clouds had snuck up on us from behind the ridge and the entire top of the mountain and our route down was enveloped in thick, cold and very wet clouds.
The walk back to the car gave me a new definition of the phrase 'This sucks!'. The path we were walking was 2 foot away from the edge of the cliffs and the visibility was so bad we couldn't see the edge. All the way down the mountain, without any shelter whatsoever walking into freezing driving rain. Drenched to the skin.
Finally got back to the car about an hour later, shucked off the outer layers and did a 45 minute drive home in a car with no heating (it died the week before), shivering and turning slowly blue.

please leave a comment but be aware that anything that i feel is abusive, unpleasant or spam will be removed.